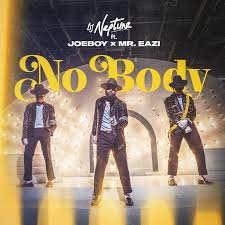 Joeboy, Mr. Eazi, and Dj Neptune came up together to release a melodious hit titled ” Nobody“.This song talks about a girl that her guy would give her anything she wants to prove his love to her, telling her not to move around with another guy that it makes him feel uncomfortable, love comes with truth and patience.

DJ Neptune Award-winning international disc jockey and producer, teams up with emPawa’s Mr. Eazi and Joeboy on his new single titled “NOBODY“. Featuring this triple threat of talent, the atmospheric record was produced by Neptune Records’ in-house producer Magic Sticks.

Away – Oxlade; Love In A Happy Place