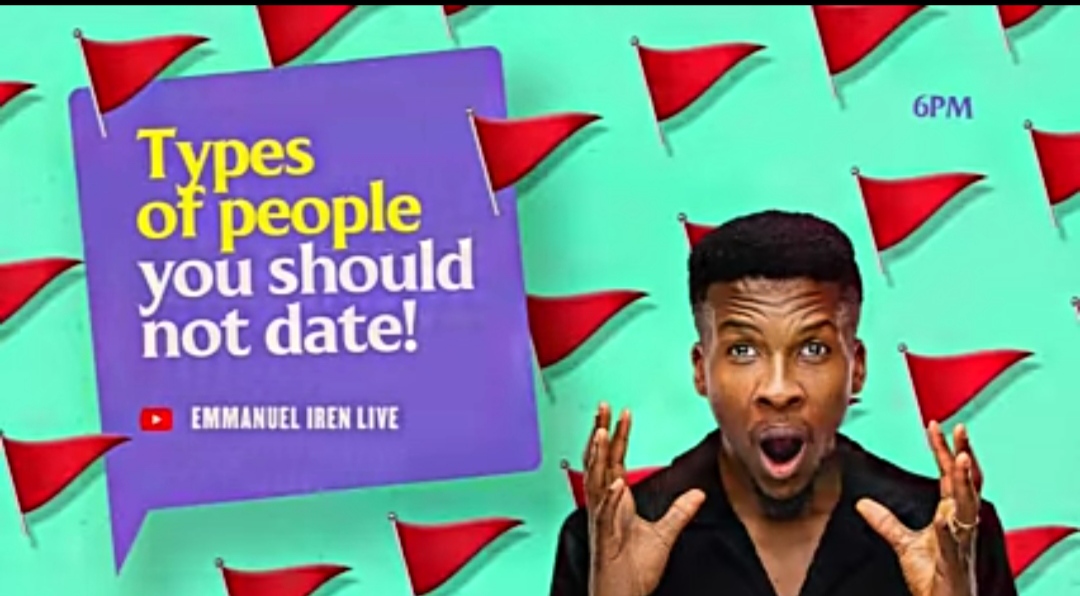 The most important decision you will have to make in your life is choosing who you will spend the rest of your life with. If you have the wrong partner under the same roof, then you are in trouble.

Dating should be for the intention of marriage and not just for the fun of it.

Type Of People You Shouldn’t Date

1. The Woman Who Says I’m Not Ready: If a woman you are dating tells you that she ‘doesn’t see you that way’, don’t push it. If she categorically tells you that she’s not interested, don’t date her. Sometimes, she will string you along and it can be unintentional.

2. Avoid Chronic Flirts. When a lady Is in a relationship and she’s committed to her partner, she most times tends to not be interested in other people. When a lady you are dating is still giving a lot of other guys attention, Just know you are in the relationship alone.

3. A Woman Who Is Materialistic: A lady who truly loves you and is interested in you will care about what your plan is concerning your finances. A lady who just lets you squander money without helping you save because she keeps asking constantly Is a sign that she’s not interested in you.

How Do You Know A Materialistic Lady?

Every conversation leads to the fact that you have to bring out money to pay for something or send it to her.

Another way to know a materialistic person is through her friends. A man should not be stingy but when in the dating phase, a woman Is already putting all her responsibilities on you, run.

4. The liar: A lady who sees the future in you is going to have a need to be open.

Men You Should Not Date

1. Men Who Are Married And Separated: Married and Separated is different from Divorce. If he is truly committed, he should finish by getting a divorce. Imagine a day he just begins to remember all the things he has gone through with his first wife and he decides he’s going to make it work with her, what are you going to do? Sometimes, they might not even be tired of the marriage, they just used you to while away time.

2. A Man Who Is Not Ready For A Relationship: A man that is always giving signs but doesn’t say any verbal commitment. Many guys go for what they want. If he is not saying it then that’s a red flag. If he has not verbally told you that he wants to date, it’s either of two things; either he doesn’t feel you are the one but he enjoys your company or he just likes the commitment, attention and every other thing that comes with a relationship but he doesn’t want the label. When he says, we don’t have to tag ourselves, boyfriend and girlfriend.

3. The selfish Man. When you marry a man that is so full of himself, he is not sensitive to your emotions, he doesn’t care. When there’s a decision to be made, it’s his way or nothing. He is not open to consideration.

That is not someone you want as a life partner. Most of them end up abusing their partners so you have to watch out for men like that. If every time there is a problem, he always sees you as the problem then you should know he’s a selfish man.

4. A Dreamer: he doesn’t have a pattern of consistency. He’s always talking about things he’ll do, things he’ll become without doing them. The worst thing you want is to have a man in your house without a clear sense of direction.

5. Emotionally Unavailable Man: No matter how busy you are, you should be able to create time for the one you love. If he can go weeks without even having little time to talk then you should leave.

Sometimes, they don’t do it on purpose, maybe because they were hurt or they are not used to that kind of warmth. Pastor Iren said, Heal Before You Deal. Heal from that hurt and pain before going into another relationship. Don’t let someone else suffer for it.

Marriage deserves all the seriousness. It is not a game or a joke. It’s about picking the person you are spending the rest of your life with.

Who Is Pastor Iren?

Pastor Emmanuel Iren is the Founder and Lead Pastor of Celebration Church International, CCI with its headquarters in Ikeja, Lagos and branches in Abuja, Lekki, Yaba, Ile-Ife, Portharcourt, Ibadan, Canada and the UK. He is a singer, songwriter, author, and husband to Pastor Laju Iren and they are blessed with two beautiful daughters.