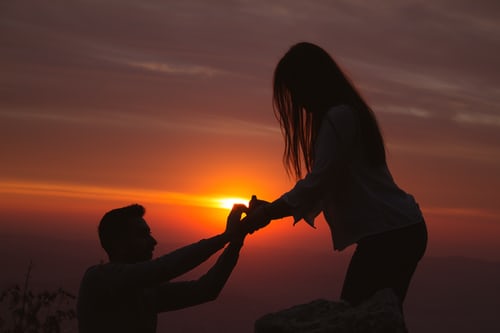 Every man who is chasing the interests of a woman always wants to know if the woman likes him. I’ve been there before and a lot of you reading this have been there before. You meet someone wonderful and take them on a date and when the date is over, you can’t tell if the girl likes you. A lot of the time, it’s difficult to understand a woman’s behaviour towards you especially if you’ve been getting mixed signals.

Most women won’t reject you directly; they’ll try to let you down gently while being polite. Learning to know when a woman likes you is really important so you don’t end up wasting time with women that don’t like you. This post will help you gauge a woman’s interest level but it’s important to not only look at only one of the signs and conclude a woman likes you; look for multiple behaviours that don’t clash.

A woman who likes you will always make herself available for you. She’ll move things around in her schedule just to fit you in. If the answer is yes each time you ask her out for coffee or lunch then it’s obvious she likes you. A woman will not waste her precious time on a guy she’s not interested in.

If she really can’t meet you, she’ll make a counter-offer — for example, she might say, “I’m sorry I can’t catch up with you this Friday, but what about Saturday?”. This concept of a counter-offer is very important; you need to distinguish between an actual counter-offer and a polite rejection which can come in various forms including when she says, “I’ll take a rain check” but there’s no immediate follow up from her. If she asks to take a “rain check” or anything of that nature, wait for her to take the initiative to contact you with an alternative date or time for a catch-up.

If she cancels a date more than once it’s a major RED FLAG — unless she’s sick and needs hospitalisation, has a sudden death in the family or anything else considered serious enough to break a date twice, don’t waste your time with her, move on, my guy.

How responsive is she to your messages? This can be text, Facebook, Instagram, email or whatever. This is a good litmus test for whether she likes you or not. If she always responds quickly to your messages, she likes you. If you notice that she replies to other comments on her social media platform but ignores your messages for several hours or even a full day, then she may not be into you — especially if this happens often. Generally, a woman that likes you will let you know how sorry she is that she wasn’t able to reply straight away and will give you a good reason as to why she was too busy to respond.

Why does responsiveness matter?

It’s simple — she doesn’t want you to lose interest in her, so she’s eager to keep the back and forth communication going for as long as possible.

You see, most women understand that momentum is important when it comes to dating.

If your relationship is not progressing, it’s going backwards. Attraction can be lost just as quickly as it’s gained. Just because there’s attraction today, it doesn’t mean they’ll be attraction next week, next month or in six months.

The way a woman responds to you when you talk to her can tell you a lot about whether she likes you or not. As you carry on a conversation, you need to pay close attention and collect data on her mannerisms.

If she’s really feeling you, she’ll be very attentive and engaged during a conversation. She’ll ask you questions when the conversation seems like it’s not flowing, her voice will become high pitched signifying excitement, she’ll be more agreeable to your opinions about life and all manner of things — she doesn’t want to rock the boat. When she’s attracted to you, the conversation will naturally “flow” and you will also notice that she laughs a lot at your jokes, even the ones that are not funny.

One of the most obvious signs a woman likes you is when she touches you. Sorry to disappoint you but she won’t be reaching straight for your crotch. It could be a light touch on the arm or shoulder. If she really wants you to get it, she’ll be more daring and rest her hand on your leg. Most women have been trained from when they were young girls not to carelessly touch men for fear of sending the wrong message so if she touches you, it’s a big deal.

Some women are just touchy-feely — it’s in their nature and they do this with their girlfriends and men with whom they have a platonic relationship with. You need to see how she acts with other men and observe whether she touches them — if she doesn’t then it’s obvious she likes you.

You also need to watch out for the ‘accidental touch’. Does her hand brush up next to yours when she’s sitting next to you? Does her thigh graze yours every now and then when you’re sitting side by side? Has she clipped your legs under the table a few times?

All these seemingly “accidental touches” are not really accidents, she’s flirting with you bro. And just so you know, she’ll keep a very straight face and pretend nothing’s happened. Women get a kick from making you think hard about whether the touch was deliberate or not….it’s all part of the game.

When a woman wants you, she’ll try her best to be around you. Does she always seem to be in your direct line of vision? How often do you bump into her at the same place and time?

This could be a deliberate move to get you to notice her. She knows your favourite hangout places and what time you go there. It’s never always a coincidence when you bump into the same woman often.

Has that ever occurred to you?

If not, then you need to start paying attention.

You know the saying, “out of sight, out of mind”? The opposite is true: If you see her all the time, in her mind, you might think of her often and strike up a conversation.

You’ll be surprised what women can do to get you to notice them. She’ll look at your Facebook to find out what events you’re interested in going to, do some research on what sports or movies you’re into….trust me, I know this from personal experience.

Body language doesn’t lie. Unless you’re a highly trained Russian double-agent and you’ve been through spy school to learn how to fake body language, chances are that you can’t fake it.

What body language signals should you look out for?

Lots of smiles — If she can’t stop smiling during a conversation, she’s definitely into you.

Leaning towards you — She’ll lean towards you and face her entire body in your direction to give you her full attention.

She’s in your personal space — Pay attention to how physically close she is to you. If she likes you, she’ll close the distance between you; it means she’s comfortable around you.

If you’re looking for a dead giveaway sign that she likes you, it doesn’t come any obvious than her reaching out first via text, phone call, email, Instagram, Facebook or whatever just for a casual chat. It takes a lot for most women to be the first ones to make a move. She’s fighting against all her instincts and everything she knows about dating. She doesn’t want you to think she’s ‘loose’ by contacting you first, but she’s hoping the ‘risk’ will pay off.

In conclusion, when a woman likes you, you can see any of the following signs and then make a decision on how to move forward. You can either ask them out directly or make your intentions clear on a date.

Ten Ways You Can Show Appreciation To Your Partner

What To Do When A Girl Acts Distant Suddenly